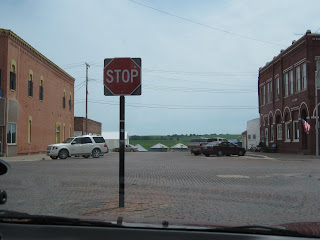 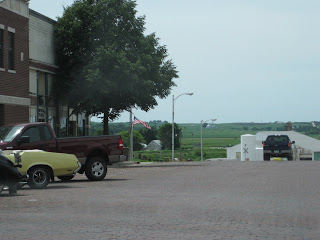 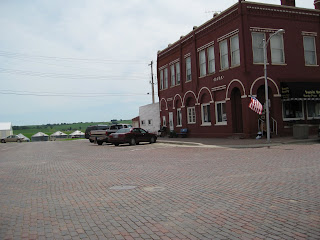 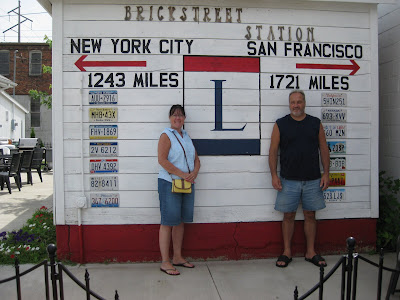 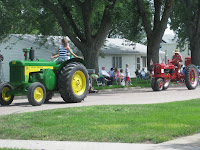 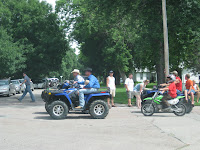 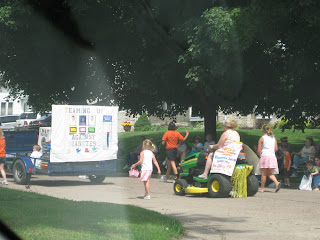 Another 515 miles logged. We stopped off in Woodbine, Iowa. Can you believe they had a parade to welcome us? We had heard of Woodbine on a PBS show and as we went to drive through the town center we were stopped by a parade. The occasion was actually the fact that the rodeo was in town. One of the locals, an old-timer, told Tony that the parade would end with some "big-ass tractors." We included some photos of the parade, including a woman riding a lawnmower. We stopped off at the Brickstreet Station, which was mentioned as a place for Lincoln Highway info. It is a converted canopy gas station. It got its name from the brick streets that they are in the process of rehabilitating. (Check out the photos.) The people in the Backstreet Station were very friendly. We had our picture taken and we're now hanging on the Lincoln Highway Wall inside the station--we also took a photo on our own camera so we could post it. Woodbine is very quaint. The town center ends and farmland literally backs up to it!

We crossed the Missouri River into Blair, Nebraska and continued traveling along the Lincoln Highway/Route 30. All I can say is: Holy freight trains, Batman! I never saw so many trains in one day. I can understand why some locals want to ignore railroad crossing warnings since many of the trains are more than 100 cars long.
Tomorrow we will leave the Lincoln Highway for a while and head into Colorado.
Posted by Roadtrip USA at 6:41 PM